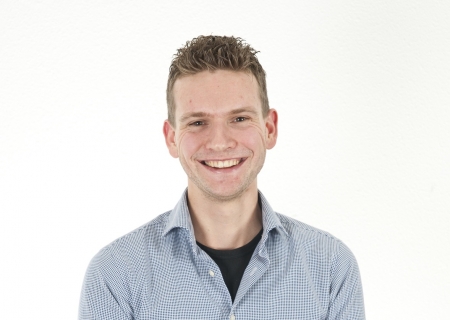 In collaboration with Wageningen University and Research, innovation manager Maarten Hollemans of Coppens Diervoeding is conducting a multi-year project on early nutrition. A scientific publication has recently been published on the effects of early feeding and transport on broilers. Maarten would like to tell you more about his research, the conclusions that can be drawn from this and the follow-up research.

Reason
"Early food has quickly become popular in the sector," says Maarten. "A lot of research was done, but that research was mainly carried out with the focus on the early life of the chickens. The research was not focused on the effects in the later life of the chickens, such as the development of the immune system. Various systems came on the market where the chickens came out in the barn or were supplied with water and feed at the hatchery. So it was time for an extensive study to show the differences between early and late nutrition and gain insight into the effects in the longer term. "

Test set-up
Maarten: "We have done a test where we fed chickens immediately after the outcome or only after 72 hours. During this test we looked at day 4, 10 and 14 at the microscopic structure of the intestines of the chickens. We saw that the intestinal villi in the early-fed chickens on day 4, twice as wide than in the late feeding chickens. That is a big difference and creates a larger absorption area of ​​the intestine. But on day 10 and day 14 we saw no difference between the two groups of chickens. So the chickens had recovered quickly. "

Intestinal integrity
"The intestine must be able to absorb the offered nutrients, but at the same time must protect against unwanted absorption of intestinal bacteria, for example. This is regulated by, among other things, tight junctions. These are protein complexes between intestinal cells that you can best see as a sieve. The size of the openings in the sieve is continuously adjusted by, among other things, cytokines and hormones. When the intestine is inflamed, excessive leakage can occur with the result that bacteria, but also toxins, enter the bloodstream. We wanted to investigate whether this is also the case with late-fed chickens. That is why we measured the intestinal integrity of these animals. To be able to measure intestinal integrity, we have resolved a so-called marker in water and given to the animals. This marker can easily leak through the intestinal wall into the blood when the intestine is damaged. After two hours we measure how much marker there is in the blood. That is a measure of the degree of leakage.

We found that on day four (after 72 hours of feed deprivation) slightly less leakage was present in the intestine in the early fed chickens. However, this small difference was no longer present among the chickens that we examined on day ten. We also could not find any bowel damage during microscopic examination on day four. "

Starvation effect
"On the basis of further research we got the impression that the slight reduction in intestinal permeability in the late-fed chickens was most likely due to the absence of food in the intestine. It is therefore no damage or inflammation.

Research on chickens, but also many other animal species, has shown that the tight junctions will allow larger molecules to pass through hunger, "explains Maarten. "That is a strategy to include what is still present in the intestine. No or hardly any damage occurs to the intestine. The intestinal epithelium is also completely renewed approximately every three days, so any damage is repaired very quickly.

200 grams of difference in weight
"The research also shows that on day 15 there is approximately 200 grams of difference in body weight between the early and late-fed chickens. That is a huge difference for a broiler farmer. But 72 hours of food abstinence is not very relevant to practice. A late-fed flock of chickens has an average of 20 to 40 hours without feed. That is why we have also done a trial with chickens that were only able to take food for the first time after 36 hours. The difference in body weight was only 30 to 50 grams at 35 days. "

So early food does not make any sense?
"We see a small gap in gut development in chickens that are fed later, but they quickly make up for this backlog. In addition, the difference in body weight at the end of the round is not really big. But in my opinion this is still relevant for a broiler farmer. Furthermore, early nutrition helps to give chickens a better start in the first days after the outcome, so I think that early nutrition does make sense. "

Participation Ponco in the BIG Challenge 2018